Thank You, Mr. Falker: The Story of John Richardson

Re-reading books I love is one of my most favorite things to do. Re-telling happy stories is also a favorite. So, for Slice 7 I'm re-telling a story about a favorite reader and writer that seems most fitting on March 7th, World Read Aloud Day.

The story begins almost 14 years ago in my third grade classroom in Birmingham, AL. John, a favorite custodian and friend to all the Corgill Kids, stopped by every day to empty the trash, refill the paper towel dispenser, and soak in a bit of reading workshop. One day John was browsing the picture book shelves with several third graders, and picked up the book, Thank You Mr. Falker by Patricia Polacco. I love everything Patricia Polacco, and told John he had chosen one of my favorites....but I didn't share what the story was about. He asked if he could take the book home to read, and of course, I was happy that he would be reading this book to his children and grandchildren.

Days passed and I had forgotten that John borrowed the book. He still continued to visit us every day, and he always asked the children about their reading and their book choices.
On one of those ordinary reading workshop days weeks later, John brought the book back and asked if he could speak to me privately. He had Thank You Mr. Falker in his hand as he spoke.

Thinking for weeks now that this man had been reading this book to his grandchildren and enjoying it at home, I was stunned. I learned that John, this kind, hardworking man in his mid-sixties, couldn't read and had gone through his entire life pretending. He made it through ninth grade without a single teacher learning his secret. He worked an entire career in a factory without a single person knowing his secret. And now, he was working in our school, a place full of readers--a place that called him to be a reader too.
I learned later that John had his wife read the book to him at home. It was simply a miracle that he chose Thank You, Mr. Falker from our shelves.

From that day forward, John and I met in the early morning hours before school and during the summer learning to read. We read books together that John later read to his favorite groups of kindergarten students. We read books together that John would then share with my students in our reading workshop and morning meeting times. Soon after, John began to write too in his shiny blue writer's notebook. Poetry became a favorite of his, and he read and wrote lots of poetry on those mornings together.

I’m happy to say that because of Patricia Polacco's Thank You, Mr. Falker and two years of early morning reading workshops, John Richardson, and I met to read, write, and talk---and my friend, who learned to read in his 60's, reads, writes, and shares with others how being a reader and a writer has changed his life. 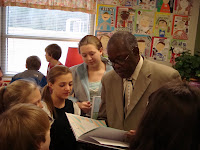 John now speaks at his church and reads scripture to the congregation, shares his struggle (and triumph!) in literacy with groups in the community, is still invited to read to classes of students—and is still writing poetry! In fact, I have a framed copy of one of his first poems, “The Great Red Bird”.
I’d say it’s a “freeing” piece of work, about a little bird returning to his nest and learning to fly.

Thank you For Sharing Posts With Fellow Educators 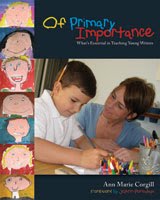 Thank You for Following!